Don’t these discoveries mean that the artists “cheated”? 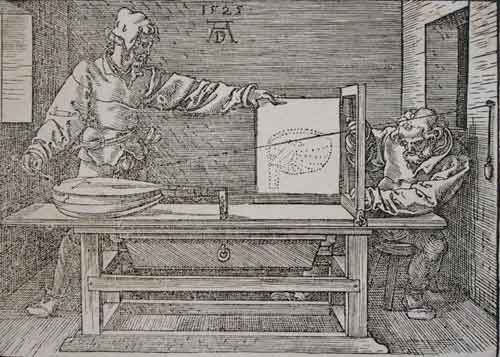 In fact, a lens is not all that easy to use in this magnification range of ~1:1, nor does it choose the composition for the artist, nor the colors. For this reason, I often say in my lectures that if you thought someone like van Eyck was “merely” a genius, you underestimated him.

How have various disciplines responded to your discoveries?

Since the spring of 2000 I have given over 150 research seminars and public lectures on these discoveries to audiences composed largely of scientists (e.g. National Institute of Standards and Technology), working artists (Association of Medical Illustrators), science and art educators (American Association of Physics Teachers and National Art Education Association), art historians (National Gallery of Art), historians of science (ESF Workshop on ‘The Hockney-Falco Thesis Revisited’), and the general public (Guggenheim Bilbao). Invariably I have found interest in these discoveries so high that a full hour after each talk has ended over half the audience is still there asking questions. With a total attendance now over ten thousand, I have quite a large sample to draw from to answer this question.

Scientists: My experience has been that scientists and engineers overwhelmingly understand the evidence and our scientific analysis of it, and find our conclusions convincing.† (see, however, an article in Nature). As a result, most scientists have been interested in expanding upon what they hear in my talks, rather than questioning our analysis or conclusions. Scientists tend to have historical questions, questions about the possible presence of additional optical artifacts that I didn’t have time to mention (e.g. chromatic aberration), technical questions about focal lengths and physical sizes of the lenses, comments on how the interest in this by the general public might be used to convey a better appreciation of the importance of science and art to them, etc.

†For example, near the end of my Engineering Colloquium at NASA Goddard Space Flight Center in May 2002 I asked how many in the audience did not find the optical evidence I had presented compelling. Three people raised their hands (one of whom turned out to be an art historian who was attending as a guest of one of the optical engineers). I then asked how many did find the evidence compelling and over 100 raised their hands. Coming as it did from such a large group of undisputable optical experts, the ~100:3 result of this “straw poll” provides an indication of how firm our scientific evidence is judged to be. My host for this talk was H. John Wood, Optics Lead Engineer for the Hubble Space Telescope Project, and Chair of the Optical Technology Division of the Optical Society of America. John is among the group who finds our optical evidence compelling. Another example is the Optical Society of America features me as an Optics Celeb for my work with Hockney, on their website designed to interest youth in careers in optics..

Artists (painters, sculptors, photographers,…): As with scientists, my experience has been that nearly all artists who have commented on it also have said they find our conclusions compelling.† But, for somewhat different reasons than scientists do. Artists recognize the utility of lenses as an aid for transforming the three-dimensional world onto a two-dimensional surface. Given the opportunity to use a new tool that would make their efforts easier, many working artists have commented that “of course” they would use it themselves. So, the fact that they themselves would use a new tool today is an additional reason they are convinced by the evidence that artists 600 years ago did the same thing. Questions from artists tend to be about the details of the concave mirror that is needed, how to set up a camera obscura in their studio, how a camera lucida works, what kind of lighting conditions are required, etc.

†The one exception are certain artists who make their living by producing portraits “exactly like the Old Masters did,” by which they mean, without optics. A group of these artists picketed the Metropolitan Museum in 2004 to denounce us for having “defamed” the Old Masters.

Science and Art Educators: Educators have been quite interested in our discoveries, recognizing how useful they are for teaching both science and art to people with a wide variety of interests. Also, educators have a practice-based knowledge of the actual use of a variety of tools in their work. Already one M.A. thesis in Art Education has been written (by Aimee Allen; available through University Microfilms/UMI), and I have been contacted by both science and art educators to conduct workshops for them on teaching various concepts using our discoveries. At the 2008 annual meeting of the National Art Education Association I presented ‘The Ziegfeld Lecture’, awarded for my role in developing ‘the Hockney-Falco Thesis’ and for its impact on art education.

Art Historians: As a group art historians have been much less receptive than other scholars. The most common objection is the lack of documentary evidence, by which they mean the lack of written description of the use of lenses by artists or by subjects of portraits (of course, David and I point out that the paintings themselves are the documentary evidence). Early on, I often heard the comment that there was no evidence appropriate lenses even existed in the 15th century, but I then found Tomaso da Modena’s 1352 paintings showing concave mirrors, spectacles, and a magnifying glass, and demonstrated to audiences that each of those optical components could project the necessary images, so that objection isn’t raised by art historians anymore. In any case, without speculating on the reasons why, my experience has been that fewer than half of art historians accept our basic conclusion that artists such as van Eyck and Bellini used lenses.

Historians of Science: Few science historians have had much to say about our results. As I discuss elsewhere, an exception are seven papers in Early Sciences and Medicine 10 2, (Brill Academic Publishers, 2005) edited by Sven Dupré of the University of Ghent, containing contributions selected by the editor from seven the 25 who presented papers at a workshop, plus one who had not been there. Although in his Introduction Dupre summarizes their conclusions by saying “Taken together, the visual and the textual evidence presented in these articles, makes the Hockney-Falco thesis extremely unlikely [for the period prior to 1550]…,” not all of the papers he selected actually are negative. However, quite remarkably, all of these historians reached their conclusions without addressing in any of their papers any of the scientific evidence we have published. Essentially, those that have rejected our scientific thesis have done so without considering any of the scientific evidence for it. Further, they misstate that the “Hockney-Falco Thesis” is that concave mirrors were used to project images. As we have written since our first article in 2000, our thesis is about the use of optics, not necessarily concave mirrors (although, there is strong circumstantial evidence for the use of mirrors at the outset). Quite aside from mirrors, as a video clip elsewhere in this FAQ shows, the spectacles in van Eyck’s ‘van der Paele Altarpiece’ would have been perfectly suitable for projecting images of appropriate size and quality. Also, one of the historians (who did not attend the workshop), Sara Schechner, does not understand the properties of materials, failing to realize that no iron mirror could possibly have survived for over 500 years without having almost completely rusted away. Unfortunately, the historians who reached negative conclusions started from the same fundamental misunderstanding of our thesis, and then relied on Schechner’s flawed understanding of both optics and the properties of materials. Dupré summarizes, “…while the textural evidence on its own cannot fully exclude the discovery of image projections, taken together with [Schechner’s] material evidence of poor quality mirrors, the painterly use of image projection becomes extremely unlikely [prior to 1550].” What Dupré should have written was that, taken together with the correct understanding of our thesis that optics—either reflective or refractive—were used, the historical textural evidence presented in these articles is not inconsistent our discoveries.

An example from another field might be useful in understanding the varied reactions. Noting the unusually high concentration of the rare element iridium at the boundary between Cretaceous and Tertiary sediments, in 1978 Luis and Walter Alvarez and their colleagues Frank Asaro and Helen Michel proposed that an asteroid impact was responsible for the widespread extinction of species, most notably dinosaurs, that occurred at that time. In essence, the father and son Alvarez team, a physicist and a geologist, respectively, relied heavily on their understanding of physics and of geology to deduce something that required a major rethinking of a significant aspect of the field of paleontology. Although the controversy has diminished since then, some scholars were quite agitated at the time, a few of whom wrote intemperate comments about the Alvarez’s themselves, rather than about their ideas. Twenty-four years later I believe most, but not all, physicists are convinced that the Alvarez’s basic scientific conclusion, further strengthened by the data accumulated since then, has been proven, but I also believe that a significant number of paleontologists are convinced there is an alternate explanation for the mass extinctions (e.g. widespread volcanism). Three relevant lessons can be learned from this: a few people with strong emotional attachments to a position will write nasty things about people who make claims that affect their position; irrespective of anything else, it takes years, not months, for any major change in paradigm to be assimilated into a discipline; and, the final story on anything of fundamental impact is written only when the next generation of scholars comes along.

If what you say is true, how can it be that no art historian ever noticed these features in the images before?

Many art historians certainly did notice some of the features we discuss. As just one example, Norbert Schneider writes in The Art of the Portrait (Taschen, 1999) that “This shows that Holbein’s paintings, though appearing to imitate reality with almost photographic attention to detail…” However, none made the connection between details that were “almost photographic,” and the possibility that those details might have been created with the aid of optical projections. David Hockney’s quest was initiated by him also noticing these features, but driven forward by a need to understand how they had been created. He expresses this in the following clip, filmed in the early 1990s:

What difficulties have you run into in working on such an interdisciplinary topic?

The major difficulty I’ve found is that to fully understand and evaluate our claims requires a not insignificant understanding of art and optics, as well as of the history of art and the history of science. Without this broad background, it is easy to be mislead by plausible, but incorrect, assumptions or contentions about our claims. For example, the July 2, 2004 issue of The Chronicle of Higher Education contains an excellent article by Ellen Winner on this point, which is further highlighted by the contents of the three letters The Chronicle printed in its August 13 issue. In the first letter I write that interdisciplinary research is especially prone to objections based on flawed logic. The flawed logic of the second letter illustrates precisely this point, the errors in which are addressed by Ellen Winner in the third letter.

What implications does this have for art history as a field, as well as how art history is taught?

For art historians who are interested in the artistic process of how paintings were produced, the aesthetic choices made by artists of what portions of a projected image to modify or to ignore, etc., an understanding of some basic principles of geometrical optics will provide them with access to previously unexplored areas of art history.