Are you saying that artists simply traced the images, so that paintings are in essence photographs whose latent images were fixed by paint rather than by chemicals?

Not at all. Even in the painting we have referred to as our “Rosetta stone,” Lorenzo Lotto’s ‘Husband and Wife’, only ~5% of the surface area exhibits evidence of having been produced with the aid of a lens. All the details of the painting—the composition, the colors, the textures, the tonal range—were decided by the artist, not dictated by a lens. Even today, if handed a pencil tracing of the outlines of, say, a Vermeer painting, not many artists could produce a final painting that had the qualities of the original. To give a modern example, few people are able to produce photographs as well composed as those of Ansel Adams even when using identical photographic equipment.

It is essential to understand that these “optics-based” paintings are composites consisting of elements that are traced in whole or in part from projections, other elements that may be based on only a few marks from a projected image, and still other elements that may be totally made up using the artist’s imagination. Because of this, it is perfectly possible for an artist to, for example, convey the impression of a nighttime scene illuminated by a single candle, even when the painting was created entirely in the daytime with sunlight as the source of illumination. This is nicely illustrated by a clip from Françoise Truffaut’s Day for Night, where most viewers would automatically assume the flame illuminates the woman’s face, when in fact it is a bulb located in the candle stick:

(Just as is the case with some optics-based paintings, here the cinematographer has made use of the what the viewer expects to see in order to create a believable illusion for the location of the light source illuminating the woman’s face). ©1973 Day for Night

Did all artists use lenses?

No. Not all artists used lenses, nor did a given artist always use a lens for all their paintings, nor did a given artist use a lens for all aspects of a given painting. An artist who did use a lens would have used it as a tool when it made their work easier, but would not have used it when it didn’t provide an advantage. As a specific example, the amazing detail and highlights of the chandelier in van Eyck’s ‘Arnolfini Marriage’ would have been much easier to produce with the aid of a lens, but the small dog would not have stood still long enough for a lens to be of any possible help in painting its image. That is, some features in this painting were done with the aid of a lens, while some other features were done by “eyeball” (to use David Hockney’s term) alone.

I was taught that artists back then were much better trained than today, so why would they have had to use lenses?

It is important to realize that the question of whether or not Renaissance artists had the skill to work without optical devices is unrelated to the question of whether or not there is evidence they did indeed use them. Some people have had difficulty understanding this important distinction. The many independent pieces of optical evidence we have assembled demonstrates that some artists (Campin, van Eyck, and van der Weyden, to name just a few) as early as c1430 certainly did use lenses as aids to help them produce some of the features in some of their paintings. Whether or not those particular artists had the skills to have produced the same level of detail in the same features in those particular works without having used lenses certainly is interesting to contemplate. But, the fact remains that our optical evidence shows that they did indeed use lenses to aid them in producing some of the features on some of their paintings.

Since all the projected images were upside down, are you claiming artists painted upside down?

David Hockney produced a portrait of me using my projected image, so I have first-hand experience to use in answering this question. David worked with my upside down image projected onto his canvas for something like two minutes (I was posing, so I couldn’t look down at my watch to get a more precise measurement of time), capturing those features of my face that his extensive experience as an artist had taught him were key for producing a realistic likeness. Then, after ~2 minutes he reoriented his canvas right side up and continued work on the portrait in the way we think of artists doing such things, i.e. by looking back and forth between me and the evolving image on his canvas. Consequently, the actual number of brush strokes that he made with the canvas upside down constitute a very tiny fraction of the total brush strokes in that painting. Because of this, there would be no way to later determine from detailed examination of this painting that it had been produced in any other way than entirely right side up without the use of optics.

Some people have expressed skepticism that artists could work effectively with upside down images. However, remember that Ansel Adams used a view camera to produce most of his photographs. Because of the way a view camera operates, this means the compositions of all of those memorable photographs were created by Adams with him adjusting upside-down images on a ground glass screen. The following clip shows how easy it is for an artist to work with an upside-down image. For this particular experiment, the artists were given the specdific assignment of making the most “photographically accurate” drawing possible (i.e. unlike the many aesthetic options available to van Eyck when he worked with projected images, they were not to make any changes to the scene). Each artist was given only 2 minutes to work with the projected image, capturing whatever features they thought they would later need to complete the drawing. They then had another 30 minutes to complete by working on it freehand. Even though none had any prior practice with the projected image, it should be obvious from this clip how only a very limited time is needed with a projected, upside-down, image to capture the optical perspective, as well an extreme level of detail (if so desired).

This 28-sec. clip, made at the 2007 Annual Meeting of the Association of Medical Illustrators, shows how easy it is for an artist to work with an upside-down image. (because only one camera was available to film several drawing experiments that were underway at the same time, the drawing at the end of this clip is by a different artist than the drawing in the middle of the clip).

Why didn’t artists notice the defects, like lines that didn’t quite match up when they moved their lenses, and correct them?

It is quite possible that most times the artists did notice the defects and corrected them (see my above discussion about Leonardo da Vinci). However, many of the defects we have found, although quite measurable, are small, and thus very easy to overlook. Plus, as we have pointed out, one of the most valuable uses of a lens is as an aid to help replicate intricate details on individual elements within a painting (complex patterns on rugs, jewelry, embroidered clothing, a chandelier, armor, etc.). When working with projected images of such elements within the body of a larger painting, the artist naturally would be pulled closer to the canvas than otherwise might be the case, thus making it easier not to notice such mistakes. Also, as many examples of trompe-l’oeil paintings show, it is possible to intentionally deceive the viewer quite convincingly. Therefore, it should not be surprising that a few artists might have accidentally deceived themselves by not noticing defects in their own lines. Closely related to just this point, the painter Philip Pearlstein was quoted as saying:

“Cézanne was right: a line, like the line of a tabletop, interrupted by an object, like a tablecloth, seems to reappear at a different latitude on the other side of the object, even though that makes no logical sense. It’s just how the eye works.”
Philip Pearlstein, as quoted by Michael Kimmelman
The New York Times. May 24, 2002

What about realistic scenes that never existed so couldn’t have been projected, like someone standing next to a dragon?

A lens would have been used by an artist to project the image of a feature when it helped accomplish his or her goals, but would not have been used when it did not. A lens would have been of great help in accurately reproducing for the patron a complex object like the dress in Bronzino’s ‘Eleonora of Toledo and Her Son Giovanni’ or the armor in van Dyke’s ‘Portrait of a Man in Armor’, where the item of clothing could be held static on a mannequin for as long as necessary. However, typically “eyeballed” features are also contained within paintings that have projected features; a dress in such a painting could be based on a projection but, of course, a dragon would be done without even the benefit of a model, let alone a lens. 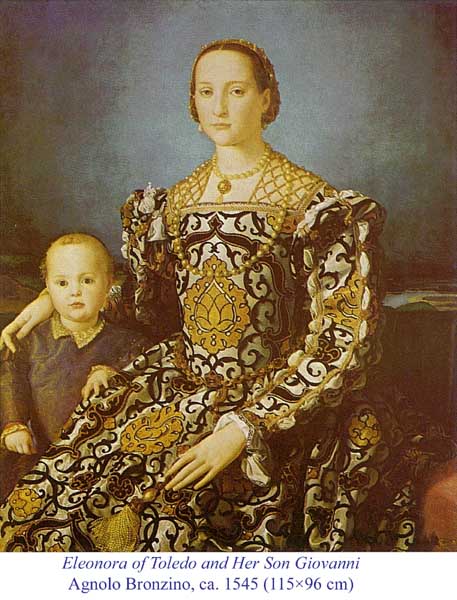 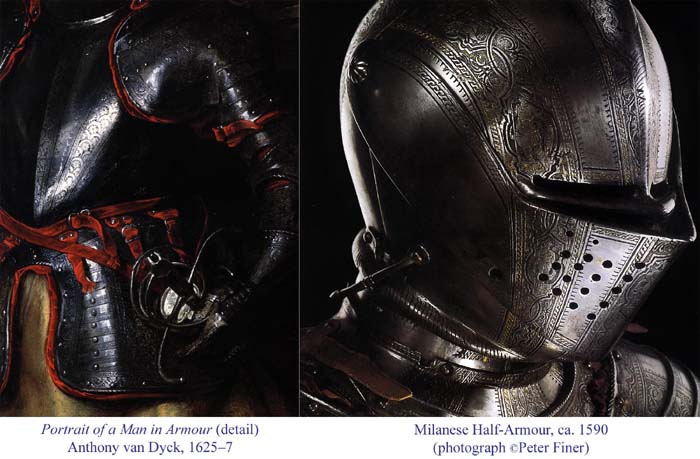 The term “realism” (“An important but slippery term,” as wisely noted by the Yale Dictionary of Art & Artists) causes considerable confusion for some, since the interpretation of that word varies widely even within the art history community. Quite often someone will use the term “extremely realistic” in a discussion to describe an image that they assume I will agree has the “photographic” look of, say, the van Dyke armor. Sometimes I will agree with their characterization, but sometimes I will have to explain why the features within the particular painting they just mentioned lack the qualities of having been based on an optical projection. Setting aside the problem of defining the term “realistic,” I note that I have yet to see a painting of a dragon with the level of detail that is in Bronzino’s dress or van Dyke’s armor (i.e., with complex patterns accurately following folds; shadows, highlights, reflections, and patinas that are of ‘photographic quality’, etc.).

When did artists stop using lenses? Or did they?

As only a partial list of artists, our evidence shows lenses were in use by van Eyck and Campin in Flanders c1430, followed by artists such as Bermejo in Spain c1474, Holbein in England c1530, and Caravaggio in Italy c1600. In his book Vermeer’s Camera (Oxford, 2001), Philip Steadman shows a variety of evidence for Vermeer’s use of a lens in Holland c1660. A 1744 portrait shows a court painter in France next to his portable camera obscura containing a lens. Wollaston invented the camera lucida in 1807 adding another lens-based instrument to the artist’s toolbox, which evidence strongly suggests was in use by Ingres by c1830. Of course, Daguerre’s and Fox Talbot’s invention of ways to chemically fix the projected images in 1839 opened up new artistic uses of lenses. In other words, there is a continuous thread in the use of lenses by some artists for projecting images to aid them in some aspects of their work leading from c1430 up to the present. However, the word “some” in the previous sentence is an important one to keep in mind.

Next: Scientific and Technical Questions >>