The overall goals of TR&D Project III are to quantify the advantages of multimodality imaging, develop adaptation rules for SPECT and CT/SPECT imaging systems, analyze the performance of the resulting systems using task-based measures, and begin the process of translating adaptive imaging into the clinic. 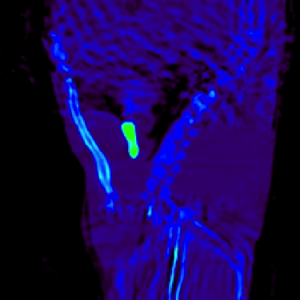 Multimodality imaging is becoming increasingly important in research and clinical practice. Task-based assessment of imaging systems has been successfully applied to single-modality systems by our research group and others. We recently laid the groundwork for analyzing multimodality systems using task-based measures of imaging quality. Task-based
assessment always involves the computation of a figure of merit (FOM) that quantifies an observerís task performance, such as the area under the ROC curve (AUC). These FOMs are computed from a finite sample of images with observers that are also trained on a finite sample of images. Thus, these FOMs are noisy estimates of the true FOMs due to random effects from reader and case variability. Much work has been done analyzing these effects under the name multiple-reader, multiple-case (MRMC) analysis. Again, this work has been performed for single modalities.

Any imaging system that autonomously modifies its configuration based on initial measurements can be classified as an adaptive imaging system. Adaptive techniques have been applied to imaging systems in many fields. Perhaps the prime example of an adaptive imaging system is the human visual system. The human eye is constantly adjusting itself in response to brightness and other qualities of the image formed on the retina. Many commercial digital cameras use sharpness measures to adjust the camera ís focus. In astronomy, adjustable mirrors were used to correct for wavefront distortions caused by turbulence in the atmosphere as far back as 1994 [Beu94]. In retinal imaging, adaptive optics is being used to adjust an optical system to compensate for distortions present in an individual ís eye. One of the earliest examples of adaptive methods in medical imaging involved dynamically modifying the pulse sequences of MRI systems based on initial measurements.