Garbage In, Garbage Out

In 2000 David Hockney and I published our analysis that showed the octagonal pattern in the center of a Lorenzo Lotto painting from c1523 consists of three regions corresponding to the depths into the scene where he would have been forced to refocus by the depth of field of his lens. Our analysis showed that all the expected features of a three-segment optical projection are evidenced in this portion of the painting, and all are in excellent quantitative agreement with the predictions of geometrical optics. Recently, however, David Stork published an abstract of his computer analysis of this painting (‘Aberration analysis of the putative projector for Lorenzo Lotto’s Husband and Wife’, abstract in the Proc. of the Optical Society of America, 2007), in which he writes “Our ray tracing casts doubt upon this claim” and that “Such ray intersections show there is never a sharp focus, nor a change in focus, of the sort assumed [by Hockney and Falco].”

Unfortunately, even though Stork does not provide details of his computer calculation, I can state with certainty that whatever it is that he has done is incorrect (it’s impossible to know whether this is because he used incorrect input data, made some error in running the program, or if he misinterpretted the output of his calculation). The reason for my certainty is that as early as 2000 we had projected various octagonal patterns ourselves (of dimensions ~10–40 cm, as found in numerous surviving carpets of that period), using optics of the specifications we calculated Lotto had used. These optical projections qualitatively and quantitatively reproduced precisely the effects—sharp focus, change in focus, etc.—we had analyzed in 2000. Stated differently, all one has to do is to simply project an image at an appropriate magnification to see with one’s own eyes that our claim is correct, and thus that Stork’s computer calculation has produced a nonsensical result. The following clip shows how easy it is to visually verify the correctness of what we first published in 2000. To paraphrase one of the Marx brothers in ‘Duck Soup’, what are you going to believe, Stork’s ray tracing calculation, or your own eyes?

Fig. 1. 1-minute clip by John Shadeck (M.A. student in art education) showing him reproducing the technique Hockney and I proposed Lotto used to create the central octagonal pattern on the carpet. As the clip shows, John used one lens from a pair of reading spectacles (2 diopter; focal length 50 cm) to focus the image of the symmetrical, octagonal pattern at the left onto his easel at the same magnification we calculated from the painting (0.56×). The small depth of field at this high magnification required John to refocus twice, resulting in a final pattern that reproduces Lotto’s to a remarkable degree.

Stork references Christopher Tyler’s incorrect paper (Leonardo 37, 397, 2004) as support that “[there are] perspective anomalies in the painting that cannot be attributed to the use of optics.” Unfortunately, with this statement Stork persists in perpetrating a fundamental misunderstanding of both paintings and of optics. As we have stated since 2000, our results show that artists only used projections for elements of the paintings where optics would have been useful, and thus paintings are composites made up of both optical and non-optical elements (e.g. the octagonal pattern is based on a composite of three optical projections; the dog is not). Also, Tyler based the conclusion of his paper on an elementary misunderstanding of optics. A simple calculation shows it would have been impossible for Lotto to make a single projection of the entire octagonal pattern of the carpet at the very large magnification of this painting (0.56×) with the necessary ~40 cm depth-of-field, unless his lens had been smaller than f/90 (i.e. less than 5 mm in diameter). If the lens had been this small, the image would have been far too dim even to be visible. Tyler’s incorrect conclusion is based on his misunderstanding of optics, falsely thinking that the entire octagonal pattern on the painting could have been traced from a single projection, without Lotto having had to refocus.

As another example that shows how easy it is to visually verify that Stork’s conclusion from his computer calculation is simply wrong, below is a life-size copy of van Eyck’s drawing of Cardinal Albergati projected by a concave mirror at a magnification of ~40%, i.e. at the size of van Eyck’s corresponding painting. This was done by an undergraduate student, Natalie Gakopoulos, as part of her senior capstone project in optical engineering (fall 2007). 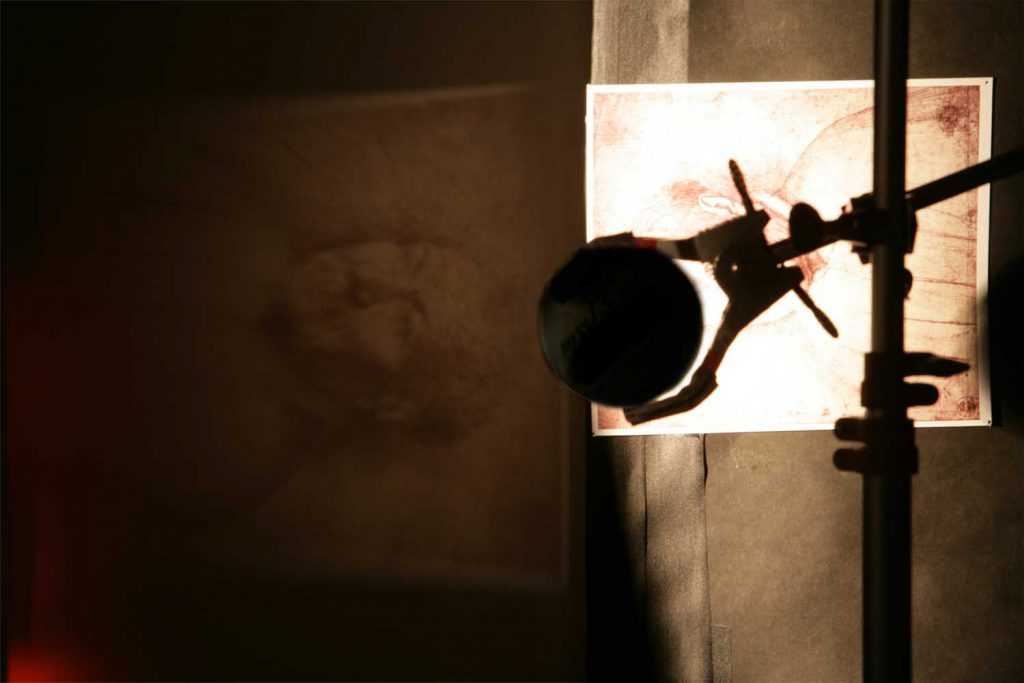 Fig. 2. Projection of a life-size reproduction of van Eyck’s drawing of Cardinal Albergati (right), by a concave mirror (center), onto a screen at a magnification of ~40% (left). Because a digital camera can capture only a limited brightness range, the exposure for this photo was a compromise to keep the drawing at the right from being washed out. This setup was created by Natalie Gakopoulos as part of her senior capstone project in optical engineering (fall 2007). Even though the measured illumination of the drawing was only 12% of noon sunlight, the brightness and sharpness of this projected image were more than sufficient to allow Natalie to easily trace it with the level of accuracy that is exhibited in the van Eyck painting. The sketch Natalie made using this optical setup is below. This is the same optical setup that Stork used for his calculation that he claims found “there is never a sharp focus,” from which he concludes it “casts doubt upon this claim [that a projected image was used].” As Natalie’s sketch shows, all one needs to do is to project an image at the appropriate magnfication to see that Stork’s conclusion from his computer calculation of this optical setup is quite obviously wrong. 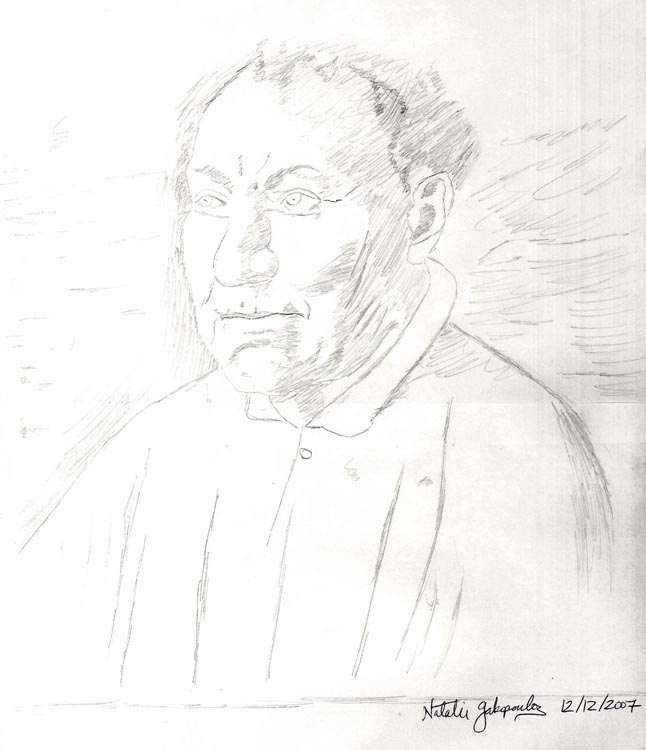 Fig. 3. Sketch of the 40% enlarged projection of a life-size reproduction of van Eyck’s drawing of Cardinal Albergati. Natalie Gakopoulos made this sketch using the optical setup shown above, using illumination that was only 12% of noon sunlight. This undergraduate’s optical setup and sketch illustrate how straightforward it is to reproduce the effects Hockney and I discovered.

Another example of a problematic application of computer calculations to art is Richard Taylor’s demonstration that Jackson Pollock’s drip paintings exhibit fractal geometry (Nature 399, 422, 3 June 1999). Subsequently Taylor said his calculation was sufficiently precise that it could date any given Pollock work to within two years of when it was created. Unfortunately, it turns out that Taylor based his conclusions on studying only 14 out of the more than 180 known Pollack paintings (i.e. less than 8%), and it now has been shown by others that his calculation both misidentifies legitimate Pollock’s as fakes, and and fake Pollock’s (created by undergraduates) as legitimate (Katherine Jones-Smith and Harsh Mathur, Nature 444, E9, 30 November 2006). Interestingly, Taylor created a drawing specifically for David Stork that they used to claim there was an alternative explanation for our findings about van Eyck’s ‘Cardinal Albergati’. Also, interestingly, a full year after the problems with Taylor’s computer methodology were published, Stork made no mention of them when writing about his collaborator that “…researchers who possess a scientist’s rigor and an artist’s vision, such as Richard Taylor … who pioneered fractal image analysis of Jackson Pollack’s paintings…” (David Stork, Vision Systems Design 12, 7 (December 2007). As the above two examples show, when based on false assumptions, selective data, incorrect data, or misinterpretation of the output, even the most powerful computer will provide results that, although they may appear to be precise, are meaningless.

As Hockney and I demonstrated starting with our initial paper in 2000, a computer is a powerful aid when analyzing the complex images that are paintings. However, Stork’s 2007 paper shows the limitation of any such use of computers. No matter how powerful the computer, if the input assumptions and/or data are incorrect, the results a computer produces will be meaningless.

<< Back to Technical and Historical Support for, and Objections to, Our Thesis