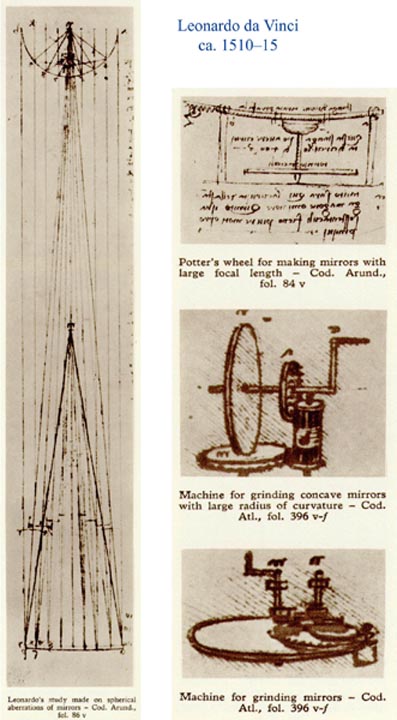 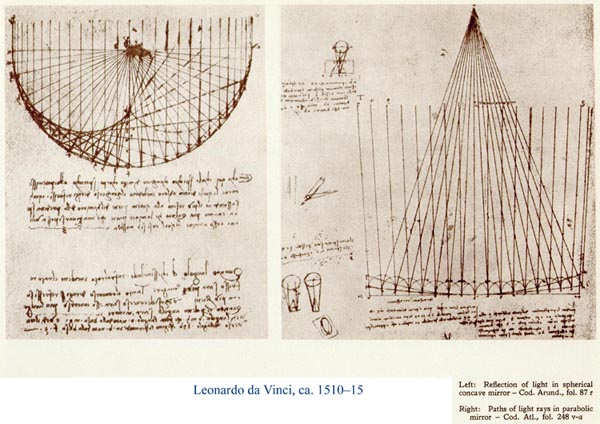 Only half of Leonardo da Vinci’s notebooks still exist, but these figures from his surviving notebooks show his interest in the optical properties of concave mirrors as well as in ways to use machines to replace skilled manual labor for their manufacture. In case the captions on the figures are too small to read easily, two of them say “Leonardo’s study made on spherical aberrations of mirrors,” and “Potter’s wheel for making mirrors with large focal length.” Apparently, though, none of his surviving notebooks contain any mention of him having used a concave mirror to project an image. However, in light of these figures alone, coupled with everything else we know about him, it is inconceivable he was not well aware of their imaging properties.

As an aside, we already know from the 1351 paintings of Tommaso da Modena and the c1275 text of The Romance of the Rose discussed elsewhere in this FAQ that concave mirrors had been in use for imaging applications since at least the 13th century. We also know from expert optical engineers like José Sasián, also discussed elsewhere in this FAQ, that it would have taken skilled optical workers back then a few days to grind and polish the mirrors. We can speculate from these two pieces of information that Leonardo da Vinci’s reason for inventing machines to grind concave mirrors may have been that demand was sufficient to motivate him to think of ways to replace slow manual labor with faster machines. Such machines also would reduce the need for skilled labor, since they would allow unskilled workers to grind the basic concave surface, leaving only the final polishing to skilled craftsmen.

<< Back to Art-Optics Historical Questions