Woofers: Golden Retrievers and Other Friends

I have been around various dogs since birth, and have finally come to really appreciate them for their companionship and unconditional love. 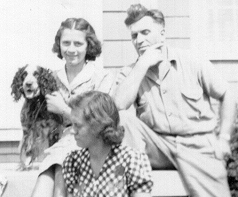 The first was Lassie, a Springer spaniel that was my Dad’s hunting dog. I just barely remember her, except for the profound sadness around the house when she encountered a hostile auto on US 10 in Midland, MI.  This is an old picture (ca 1936) showing Lassie with a cousin, an uncle and an aunt.

We moved from MI to a Chicago suburb in 1944, when I was in 2nd grade.  My first friend there was a wonderful English Setter named Torchy.   I never knew who he belonged to, but he obviously had a good home. Nevertheless, he would meet me after school and walk home with me.  We moved from our rental house to our permanent home several months later, and Torchy and I lost touch. Later that summer, he was out cruisin’ and found me.  Within minutes, he ambled down the street to a vacant lot, and brought me a baby rabbit as a gift.  He seemed to understand when we returned the rabbit to its den.  As I grew and made more people friends, we lost track of each other. Besides, he had to come quite a bit farther to my new house. 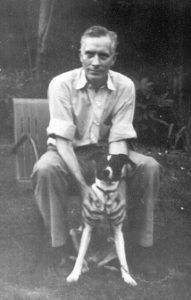 The next dog was bought primarily for me, but was a family dog as well. Pete was a smooth-haired fox terrier who got into everything, and was generally a pain in the ….. , typically fox terrier!  Mom mostly took care of him, as moms are wont to do.  I was probably about 9 years old, and didn’t understand the responsibilities.  The photo is of my Dad and Pete, ca. 1946.  One day I came home from school to find that Pete had “moved.”  I never knew where.

It was many years before another dog came into my life. My first wife (who had grown up with dogs) found a small terrier (terror) mix near where we worked.  We took her home, named her Tammy, and tried to make her our friend.  She was a world-class digger and an escape artist.  She finally demolished a section of wood fence and made her escape.  She was never seen again.

In the year 1967, a boxer puppy named Gretchen joined us.  She was a kick, bought primarily for my children to play with.  She shared outside quarters with a Siamese cat named Thomasina, because my kids (and I) were quite allergic to the cat and a bit to the dog..  She was lots of fun, but never a companion. She had two litters (kids experiencing the wonder of birth, you know the drill) before being altered, and finally went to the Humane Society (along with the cat) when we all moved to Arizona in 1970.  I truly hope she found a good home; I was already in AZ and my wife had no time to place her.

Next was Sparky, a German Shepherd pup that my wife picked up, I think at the pound.  He seemed a good guy, but was quite starved for affection.   He had the annoying habit of peeing on you when you rubbed his belly, so I finally developed a technique with an old leaf rake.  When my wife and kids packed up and left, they promised to come back for Sparky, but it never happened.  As a full-time graduate student, I had little time.  We exercised with him following me on my bike, yipping all the way.  He found a long-lost tick nest and soon had himself and the house infested.  My real estate agent found a good home in the country for him, and I had him “serviced” (i.e., tick dip, etc.) and placed where a much better life ensued.

Sometime in the early seventies, my sister Anne acquired a flat-coat retriever to go along with her border-collie mix Kegi.  Shortly thereafter, Blue was bred with a quality male, and Anne kept one of the pups, a male named Sweeper, because he was jet black, like a chimney sweep.  This was the first time as an adult that I learned about retrievers and their wonderful qualities.  The memory of those three dogs still remains, and was the impetus for today’s love of retrievers.

Again many years passed until 1985, when my second wife Judith bought a Golden Retriever pup named Bailey for her younger daughter Julia. They felt we really needed a woofer to go along with the tweeters (parakeets)!   This was the first time I shared interior space with a dog, and I was not wholly in favor initially.  But with him around,  I finally realized the intrinsic value of a good dog.  He was quite the likeable character, after puppyhood and training were passed.   Bailey went to the Rainbow Bridge in August 2000.  (more about Bailey coming)

A year later, Judith and Julia embarked on a 4-H project to raise a guide dog puppy for Guide Dogs for the Blind in San Rafael, CA. The raisers supply basic obedience training and socialization under every conceivable condition.  Ours was a yellow Labrador Retriever named Frances, the girl on my home page. (more about Frances coming).  Frances went to the Rainbow Bridge on February 16, 2001. 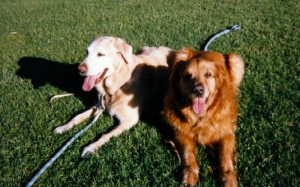 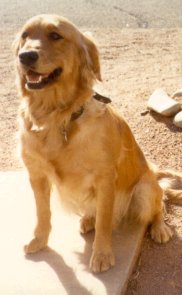 When Frances went back to Guide Dogs for the Blind, we got another Golden Retriever named Georgeanne.  This little puppy immediately took on the role of alpha bitch, and had Bailey’s number from day one.  She really ruled the roost.  After her guide dog puppy training ended, she went back to California for the real deal.  Unfortunately, she was diagnosed with congenital hip dysplasia, and already had arthritis at 18 months.  They wanted to put her down, but we insisted that she come back to us.  She was kept lean (65# max) to minimize the pain and maximize the activity.  She moved to Michigan in about 1992, to go to Michigan State University with Julia.  She still chased squirrels up until her passage to the Rainbow Bridge in 2000.

In 1997, Judith pulled up stakes and moved to NC, receiving custody of Frances and Bailey.  I went dogless for about 6 months and could stand it no longer.  I found the Golden Retriever Rescue groups on the Internet, and began to make some local calls.   I decided against a puppy, preferring an older, mellow friend who would not display separation anxiety since I’m still working. The search eventually paid off, and Rick Reid in Phoenix came up with a ten-year old named Chief.  He was truly my first dog.  Unfortunately, he came with cancer, both lungs and thyroid. Chief went to the Rainbow Bridge May 10, 1998.  I only had him 4 months. (more about Chief coming) 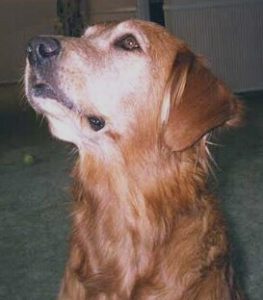 In April 1998 I got a call from Barbara Barnes, my travel agent and member of the Tucson Kennel Club. A woman was moving from a small ranch into a small apartment in town, and wanted a good home for her five-year old golden girl, coincidentally also named Baily. So Chief and I met them in a local park and the two dogs hit it off right away.  A couple of weeks later, Baily moved in with us.  It took a while.  Initially she hung out in the garage, as far from the house as possible.  After a couple of hours she took up a position in the doorway leading from the garage to the back yard, where she had a view of the house and Chief and I.  She took several quick trips to the back door (left open for her) and then went back to the garage again.  About sundown, she finally, with much encouragement, made it into the house and slowly settled in.  Baily came with a nice cedar filled bed, which Chief promptly marked.  He tried to use it a couple of times, but I shooed him away, telling him that it was definitely not for him. He eventually gave up, but Baily didn’t use it either until many months after his death. She and Chief rapidly became really good friends, with never a cross bark or snarl.   Unfortunately, the overlap was a mere three weeks.  (more about Baily coming) 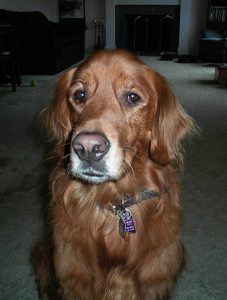 Baily passed in November 2005 when I was in Houston for cancer treatment.  She was in good hands, a foster family associated with RAG /(Rescue A Golden).  I really miss her.