Equations (14) and (16) together form the EPI principle. An EPI solution also often corresponds to the outcome of a game, with information as the prize, between the observer and nature [1a-c]. Nature’s play in the game is provided by a so-called “information demon.” The game is called the “knowledge acquisition game” or simply “the knowledge game.” By information transition (2) preceding, the information gained by the observer is at the expense of the demon. This defines what is called a “zero sum game.” Both players try to maximize their information level, so that by its zero-sum nature the observer tries to maximize his information intake while the demon tries to minimize his information payout. Toward these conflicting ends, the observer places the system in an orderly, unmixed state and collects the data independently; while the demon adds a maximum level of random noise to the data and blurs it maximally. Thus, the demon is a universal “spoiler,” acting like Murphy in “Murphy’s laws.

The logician C.S. Peirce predates this knowledge acquisition game with his “existential graphs or diagrams” (1897). This graphical approach to logic could be regarded, as well, as a forerunner of today’s familiar “gedanken experiments.” An extension of the familiar Venn diagram of probability theory, graphical reasoning was regarded by Peirce as “the only really fertile reasoning”, from which not only logic but every science could benefit. As in a gedanken experiment, Peirce regarded the use of such diagrams in logic as analogous to the use of experiments in chemistry. Moreover, as in the EPI game, which puts questions to Nature, the experiments upon diagrams may be understood as “questions put to the Nature of the relations concerned”. In this way diagrammatical reasoning may be seen as some sort of game. In fact, Peirce regarded the system of Existential Graphs as inseparable from a game-like activity which is carried out by two fictitious persons, the Graphist and the Grapheus. The two protagonists are very different. The Graphist is an ordinary logician, and Grapheus is the creator of the universe of discourse, who also makes continuous additions to it from time to time. In the latter regard, the two games seem to differ. Science usually regards the laws of Nature as fixed and unchanging. However, regarding Graphist and Grapheus the carryover to EPI is clear — the graphist is the intelligent observer, and the Grapheus is the demon of Nature.

The outcome of the EPI knowledge game is the physical law describing the given effect. The minimax aspect of the game guarantees that the outcome always occurs at a fixed saddlepoint. This describes a “fixed point” game, that is, the same outcome (EPI solution) regardless of who plays the game or which player has the first move. (Peirce’s graph game has an analogous property.) The constancy of the outcome also is consistent with the above hypothesis of a pre – existent (rather than data – contingent) reality.

In practice, EPI problems are solved using methods of calculus rather than game theory. Thus the above game properties are mainly of use in providing a nice interpretation of EPI. However, in fact the game has a practical use, as follows.

This information demon acts to further his nefarious ends, and to compromise ours, in another way. Since the output of any EPI application is a differential equation, its solution will be the results of integrations, and these will often give rise to unknown constants. What values should be assigned to these constants?

Knowing this allows us to evaluate the constants, as follows. Let the EPI output solution vector be the known amplitude functions qn(x, c1,…,cN) where the constants c1,…,cN are unknown. When this solution vector is back-substituted into the Fisher information eq. (11) the variables x are integrated out, so that what remains is a function I(c1,…, cN). The demon’s choice of the constants satisfies the minimization condition dI/dci = 0, i=1,…,N. The result is N equations in the N unknown constants. Their solution is usually straightforward to find.

This “game corollary” has many important applications, including the EPR-Bohm experiment [1a,b] and cancer growth (Refs. [1a,b] or Gatenby and Frieden, 2002). Also, there are unitless constants, such as the fine structure constant, that are regarded as universal physical constants. These may eventually prove to be evaluated by the game corollary. (See also prediction (14) below.)

On quantifying the gain in knowledge 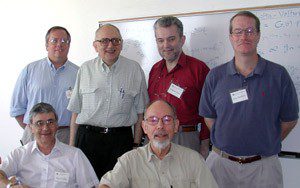 The outcome of the information game described previously is a law of nature, e.g., the Schrodinger wave equation. The law, in turn, represents a body of scientific knowledge. (Notice we are not considering alternative forms of “knowledge” that are artistic, carnal or religious in nature.) Hence, making the measurement is a means of forming data, and applying the EPI principle is a means of forming scientific knowledge. How much knowledge? Can a number be assigned to

the acquired law? How much “knowledge” does, for example, the Schroedinger wave equation represent? Notice that the SWE follows as an EPI output [1a,b] due to but a single measurement of the location of a particle. Does the knowledge contained by the SWE then merely equal the Fisher information obtained in the one location measurement? Obviously the answer is no, since the SWE is a continuous equation and, hence, represents a means of predicting all future measurements of the particle. That is, in general a body of knowledge is a theoretical means of inferring, not one, but all future observables of an effect, on the continuum. Therefore it effectively infers an infinity of information, so that this could not be used as a practical measure of knowledge. 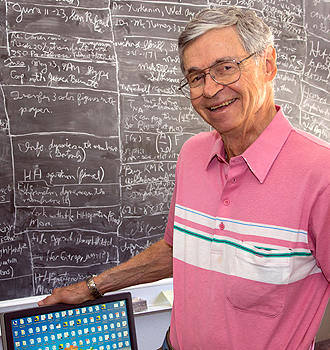