A multiphoton microscope (MPM) is a device that uses nonlinear optics in order to generate contrast in a sample. These nonlinear optical processes do not require contrast agents like traditional optical microscopes, enabling label-free 3D imaging, determination of diseases, and identification of material properties. One of the main advantages our systems have over existing MPM systems is the use of compact femtosecond fiber lasers, which enable both a small form factor, and also generate a longer excitation wavelength compared to a Ti:Sa laser, enabling deeper tissue penetration. Our systems can use Second Harmonic Generation (SHG), Two photon excitation fluorescence (2PEF), Third Harmonic Generation (THG), and Three Photon Excitation Fluorescence (3PEF) to image samples.

We published a simple yet powerful method for characterizing the performance of a multiphoton microscope using a nonlinear knife-edge technique. This method uses the sharp edge of a Galium Arsenide (GaAs) wafer and several equations to fit the edge profile to produce a final resolution result. Compared to using fluorescent micro-beads, which are prone to damage and photobleach over time, this robust technique can be used under higher irradiance and over longer time without damaging. 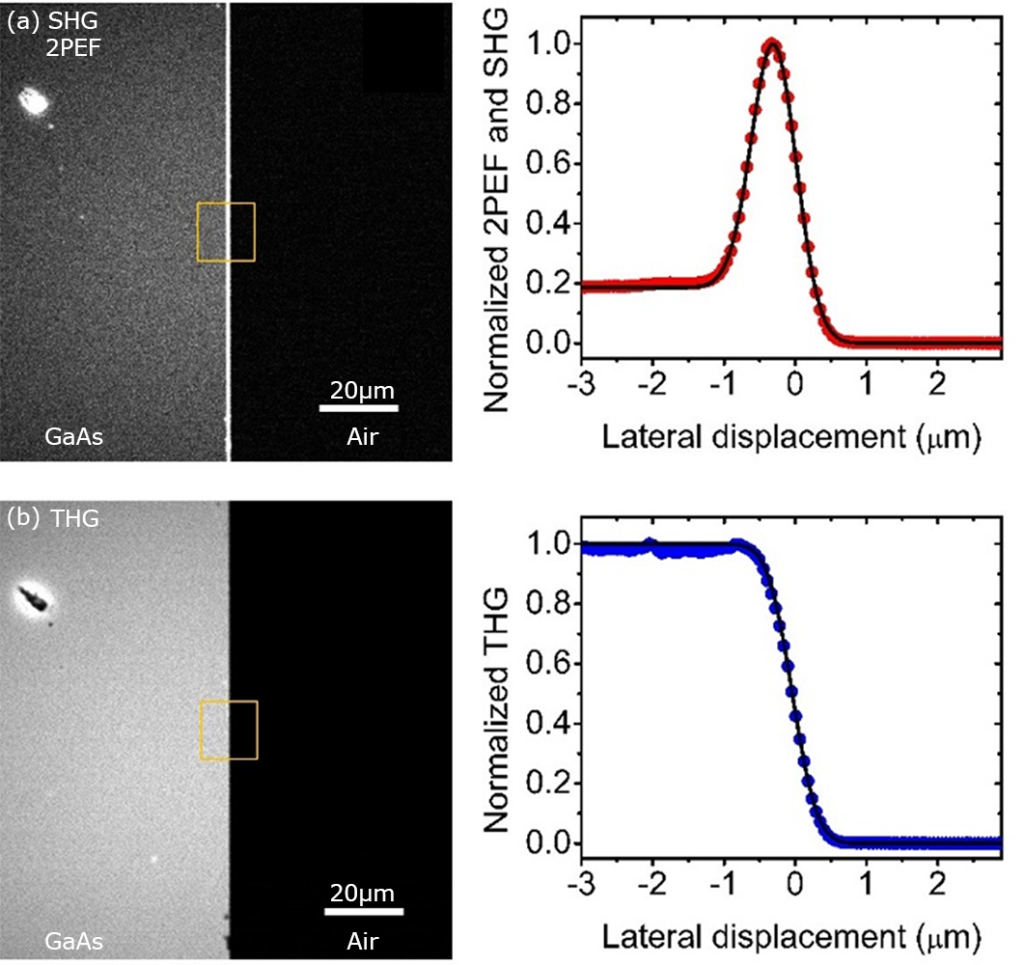 Left: Images of the GaAs slice with SHG and THG. Right: the profiles of the edge, which can be used to extract the final resolution information

We explored the use of multimodal MPM for the label-free identification of normal and cancerous tissue of the pancreas in a mouse model by comparing the images to H&E microscopy. Our early studies indicate that MPM using second harmonic generation, third harmonic generation and multiphoton excitation of endogenous fluorescent proteins can each contribute to the label-free analysis of the pancreatic surgical margin.

A collection of images from our project, comparing images from the multiphoton to H&E traditional staining. With our label-free multiphoton, we get even more information compared to the state of the art, since the margin between the normal and cancerous tissue is very evident in the final composite.

We showed for the first time that the multiphoton microscope can create useful and beautiful 3D images of gems and minerals. We compared our results to images found in the literature with traditional methods of examining stones, and found that we could capture details in 3D that were typically only accessible through sectioning of the minerals. We hope that this is the start of a new research area in gems and minerals. Supplemental images from the paper can be found here. This work was also recently presented at Optics + Photonics in San Diego, and an interview about that talk can be found here.

One of our favorite stones, shown on the left as it appears to the eye, followed by an image captured with SHG, then THG, then the two channels combined in false color.

We used targeted microbubbles to help determine the margins of pancreatic cancer. These microbubbles were used to highlight only the cancerous regions of the tissue, with the goal of eventually being used in surgery to greatly assist surgeons by enabling quick and accurate margin determination. Reliably finding the margin between the healthy and cancerous tissue is a crucial part of increasing the chances of survival in this deadly cancer.

Left: An Image of the cancerous cells taken with two photon fluorescence (2PEF). Center: An image showing the bubbles in Third Harmonic Generation (THG). Right: A composite image with both images overlaid in false color. 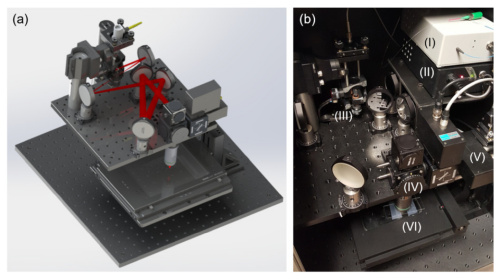 (a) A birds eye view of the rendered design of the ARMPM. The red color represents the laser light path. The total volume of the system including laser source and Galvo mirror drivers is 18in*18in*18in. (b) A picture of the actual system.

We investigated the nonlinear properties of different layers of Molybdenum Di-sulfide. This material has very strong nonlinear behavior, even creating a detectable Fourth harmonic Generation signal nearly as strong as the second harmonic signal. This nonlinear behavior was explained experimentally as well as theoretically, using a continuum-model Hamiltonian and perturbation theory.