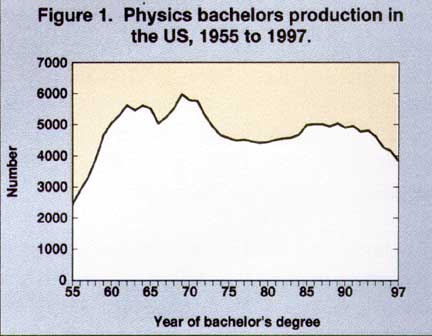 The number of undergraduate degrees in Physics has steadily declined by 24% since its most recent peak of a decade ago. Extrapolating this data into the future shows that, if nothing caused this trend to change, the last physics degree would be awarded in the year 2013, to a child who is already enrolled in elementary school. Even though the total number of college degrees issued each year has quadrupled since 1957, the number of physics degrees has now dropped to pre-Sputnik levels. Data for engineering students are roughly similar, with a 26% drop in Freshmen engineering majors since peaking in the early 1980s.

<< Return to Art of the Motorcycle