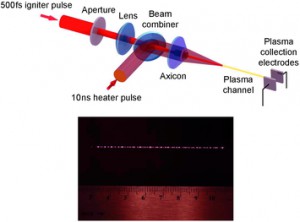 By applying ultra-intense femtosecond laser pulses and femtosecond-nanosecond pulse sequences, we create extended plasma channels in ambient air. Potential applications of these plasmas range from the remote initiation of transient lasing in the atmosphere to channeling lightning strikes. In this project we collaborate with the scientists from the Jupiter Laser Facility at the Lawrence Livermore National Laboratory 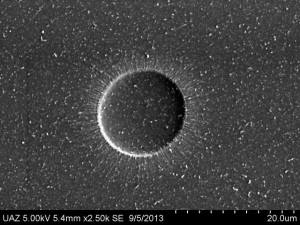 Physical processes involved in permanent material modification by ultra-short laser pulses are extremely complex and occur across vastly dissimilar time scales from femtoseconds to microseconds. Our research is aimed at the development of new predictive models describing the physics of femtosecond laser-matter interactions and at the experimental validation of these models. In this project we collaborate with the scientists from the Australian National University and from the Colorado School of Mines.